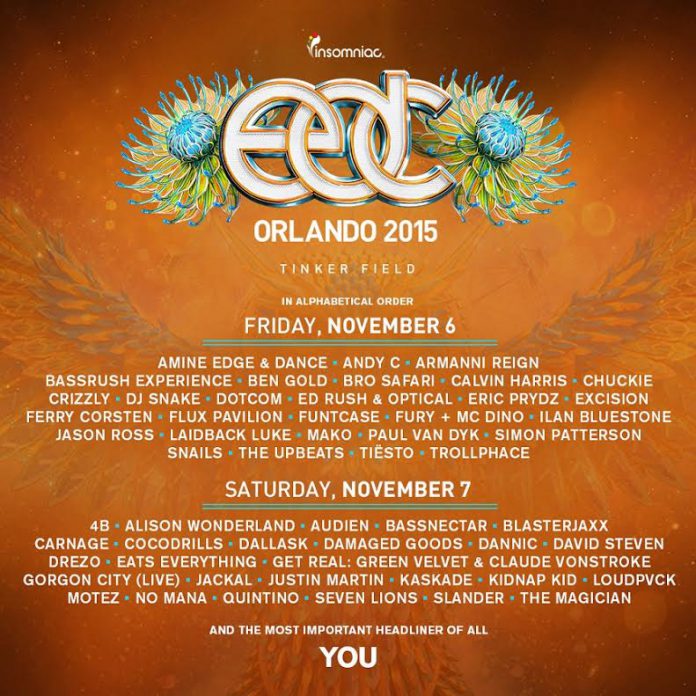 With EDC Orlando 2015 being less than 30 days away, the day-by-day lineup has finally been released. Now decisions have to be made of who to see with how stacked the lineup is. For me these decisions will be extremely hard on Saturday since most of my favorite artists will be playing then. These are my top ten of whom I want to see. Now please keep in mind these are my top ten choices, as I am not speaking for everyone since everyone has different tastes.

DJ Snake – Now I have never seen him live. While I have been listening to SiriusXM, DJ Snake comes on and I am not disappointed. DJ Snake’s style is best described as meshing hip-hop and electronic music together. I mean he is signed to the Mad Decent label and has produced music with Lil’ Jon, Diplo and Skrillex. I have also heard many great things about the show he puts on and that it is not one to miss. DJ Snake will be performing at Kinetic Field.

Ferry Corsten – Again I have never really listened to Ferry Corsten, however I must give into my trance side. He is after all a major leading Dutch trance DJ. Ferry Corsten has also been known to venture into electro, house and progressive genres too. After reading numerous reviews, as well as by word of mouth, Ferry Corsten is an act not worth missing. Ferry Corsten will be performing at the Neon Garden.

Flux Pavilion – I have been a fan of Flux but have never had the pleasure to see them live. Since I’ve always been into dubstep, I have been told to see them live. This British producer has been in the scene since 2008 and has been destroying shows around the world. Especially having been associated with other DJs like Excision, I know that I will definitely not be disappointed. Flux will be performing at Circuit Grounds.

Laidback Luke – While I was at EDCLV 2015 I caught some of this set, and I was beyond blown away. I love his style and how he gets into his sets by sometimes dressing up and getting into the music as all DJ’s should. He also has been known to share some of his sets with other DJs and together they don’t disappoint. I mean he has worked with Steve Aoki, David Guetta, and so many other great DJs. Laidback Luke will be performing at Kinetic Field.

Kaskade – I absolutely love Kaskade, since he has a very special place in my heart. He was my very first event I ever went to and made me fall in love with the music and the scene. Even though I have seen him several different times, his shows never disappoint me. Kaskade will be performing at Kinetic Field.

Bassnectar – After seeing him for the first time at EDCLV 2015 and in TomorrowWorld 2015, I can say for sure that I have become a basshead. His music and visuals are phenomenal. It will be interesting to see how Orlando takes to him. I’m very excited for this show. However, it will be very hard to decide if both Kaskade and Bassnectar are playing simultaneously. Bassnectar will be performing at Circuit Grounds.

Seven Lions – I absolutely love Seven Lions. After being able to seen him in several different festivals, all I can say is one word: Mesmerizing. His visuals are absolutely beautiful and out of this world, literally. I’m extremely excited to see what visuals he has in store for EDC Orlando. Seven Lions has also been known to go hard at times depending on vibes he feels from the audience. Seven Lions will be entrancing people with his visuals at Circuit Grounds.

Slander – Now I am definitely not one for trap. However after seeing them for the second time at TomorrowWorld, my taste for them specifically has changed. I fell in love with this duo, and can’t wait to see them once again. Especially since I had a very special moment happen during their set with one of my friends to their mix of Pompeii by Bastille. Slander will be bringing their dirty beats to the Circuit Grounds.

Get Real: Green Velvet and Claude Vonstroke – These are the two American masters of house and it’s only fitting that they teamed up together. While Claude Vonstroke is based out of San Francisco and Green Velvet out of Chicago, it was a single back-to-back set in Miami that started this duo. I have never seen these two separately, but I hear so many great things. I missed them at TomorrowWorld, so this time around I’m not missing them again. Get Real will be performing at the Neon Garden.

Audien – I have always been a fan of Audien since I saw him for the first time at Ultra 2013. His sets are beyond amazing and always gives a good show. He is even signed under trance legend Ferry Corsten’s label. Audien will definitely not disappoint and will be bringing down the house at Kinetic Field.

So there is my top ten, however I’m not speaking for everyone. The best thing I can say is follow your tastes and don’t be afraid to experiment in different styles and artists. After all it is a music festival, have fun and explore. With EDC it isn’t just about the music, it is about the experience. Explore and check the art installations, ride the rides, meet other awesome people. This girl will be doing all of the above. If you see me feel free to stop, take pictures, talk with me, and trade kandi. Can’t wait to see you all there. 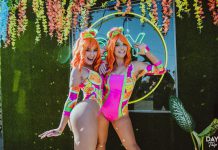